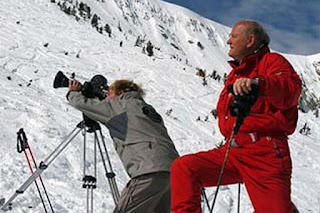 Snow-sport filmmaking pioneer -- via the Seattle Times. Anyone who's lived in the West for any length of time knew Warren Miller's films. He began after WWII, taking home movies of himself and friends skiing and surfing. Soon he turned his hobby into a cottage industry -- making one skiing feature film per year from 1950 to 2004. These he peddled himself, showing them in ski towns while filming for the following year. Slowly, he grew a sports-movie empire now run by his kids. His films were "snow porn" -- beautiful documentary films with voiceover narration containing rapturous, slo-mo ski footage, stunts, comic interludes, and the like. They were FUN. People loved them, and for decades his films were a part of growing up near the mountains. I am sure he inspired thousands to try the sport he loved so much.