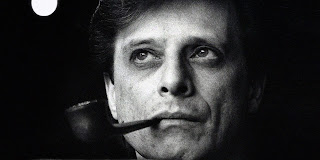 Award-winning, prolific writing great, in many mediums; masterful editor and anthologist; raconteur and madman, a hilarious and extremely confident character -- via CBR.com. He wrote such legendary stories as "'Repent, Harlequin!' Said the Ticktockman," "I Have No Mouth, and I Must Scream," the novel A Boy and His Dog, later a cult film. He wrote the best episode of Star Trek ever, "The City on the Edge of Forever," and the best episode of The Outer Limits, "Demon with a Glass Hand." The Terminator was the rip-off of some of Ellison's work. His abrasive, contentious character is best observed in the 2008 documentary Dreams with Sharp Teeth. An absolute original who influenced fantastic fiction forever.