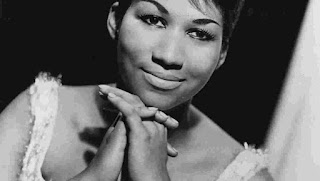 The Queen of Soul; one of the great voices of the century -- via the New York Times. She had a naturally glorious voice -- full and textured, resonant and vibrant. But it takes much more to be a great singer. She had the fire that animated that talent, turning her into a huge cultural icon, a presence evoked with a single name. She manifested herself as a comforting force of nature, an Everywoman who could articulate with precision and depth the meanings of being alive, having a breakable heart, having the strength to go on.

Her great spirit was capable of channeling the divine -- her first recording was of her at age 14 singing gospel in her father's church in Detroit. She chose to sing secular music, thank God. She made her exuberance palpable, and her tenderness, and her resolution. I saw her once, at JazzFest, decades ago -- of course, she was great. It takes great genius to sustain this openness, to bridge the gap between her mind and the ear of the listener. It felt like she was singing just for you.