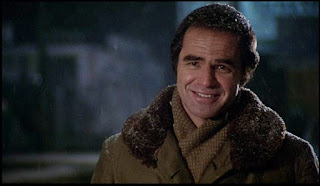 Actor and director -- via the Hollywood Reporter. He had terrible luck in love, he couldn't choose parts in film well, and life took a severe toll on him as he aged. He never won an Oscar. But the camera liked him. We liked him. He was a star.

He knew how to laugh at himself, and delivered a self-mocking, devil-may-care persona that women loved and men admired. He could actually act and act well, however, and racked up nearly 200 credits in a career that lasted 60 years.

He was always there, first as impetuous blacksmith Quint Asper on TV's "Gunsmoke," and briefly as Native American detective "Hawk" and as "Dan August." His role as the macho Lewis in Deliverance deserved an Oscar. His hilarious work in comedies such as The Longest Yard and The End is underrated. His two best films, Starting Over and Boogie Nights, are as dissimilar as those titles might indicate, but both solid.

Reynolds wound down his career at the helm of the respectable sitcom "Evening Shade." He did his best. We had fun. Bless him.