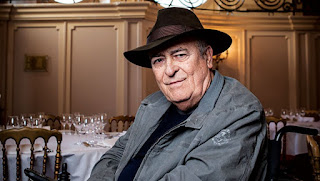 Oscar-winning director and screenwriter ('The Last Emperor') -- via the Guardian. For me, a frustrating case. When he was on his game, his movies had epic sweep but were still compelling. When he was not,  his films would turn out overblown, pretentious, and boring. Among his best efforts: The Conformist, Last Tango in Paris, The Last Emperor, and The Sheltering Sky.