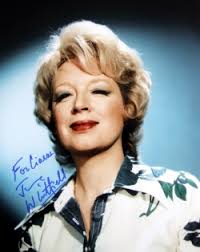 Comic actress who worked on stage, in radio, on film, and in television for a full 70 years. She is best remembered for playing the mother of Jennifer Saunders' Edina Monsoon in the TC series Absolutely Fabulous. She was in everything -- radio's Take It from Here in 1953; several of the Carry On movies, and a long association with Terry Scott on TV's Happy Ever After/Terry and June. Via the Guardian.