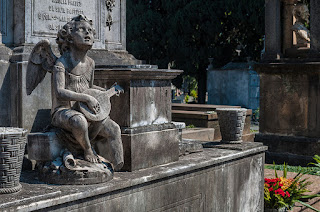 It’s the end of the year — the only time when the general public is as gaga about obituaries as I am. It’s only natural on New Year’s to review, summarize, and take stock of the past calendar year. In dozens of publications and websites worldwide lists of the noteworthy deceased spring up. We flick through them, surprised to have forgotten that what’s-his-name and such-and-such passed away in 2018. We dwell briefly on their impact and influence and move on, closing mental doors behind us.

A year-end summary is something I’ve avoided ever since I began The Obit Patrol more than eight years ago. The site, primarily an aggregator of other people’s obituary work (itself a difficult and overlooked endeavor), is run in accordance with this mission statement: to bring to readers “interesting, overlooked, and significant obituaries from around the world, emphasizing the positive achievements of those who have died,” not to run a popularity contest.

My logic was that the famous and powerful received quite enough attention when they died — but what about those who, like most of us, live and die below the level of “prominent,” “notable,” and “celebrity”? I’ve done my best to shine a spotlight on them. I don’t think the dead are concerned with ratings.

Of course, this begs the question — what qualifies a person for Obit Patrol inclusion? I am dependent on a constellation of sources that let me know of more obscure deaths as they happen, yet there are thousands more every day that go ignored.

In a perfect world, everyone rates an obituary. In fact, every life lived has significance and meaning, resonates through the world and leaves some positive legacy behind, even in acts of kindness and gestures of compassion that were never recorded and won’t find their way into the history books. As written in Ecclesiasticus, “And some there be, which have no memorial; who are perished, as though they had never been; and are become as though they had never been born; and their children after them. But these were merciful men, whose righteousness has not been forgotten . . . their glory shall not be blotted out.” Obit Patrol tries to redress that imbalance.

By including the whole world in my searches, I am constantly turning up not only significant cultural figures from other lands, but finding out about creations, thoughts, movements, and actions completely outside the scope of the insular, self-obsessed mainstream English-language media. Considering the tools at our disposal, we are among the most ignorant about the world at large. Hopefully, Obit Patrol helps to raise awareness.

What else am I trying to accomplish here, besides serving as a resource for readers and fellow obituarists, and as a repository of obit information? “The Obit Patrol also serves as a source of information on death, dying, mourning, obituaries, funerals, memorialization, and end-of-life issues. The goal: to combat the pain and fear that dogs the dying, and haunts the mourning.” I also aggregate stories about these topics and run them on my Obit Patrol Facebook page — an outdated platform, to be sure.

But what haven’t I done? Looking back at my stats for year, I can see right where a Google update killed my traffic earlier this year. They are emphasizing, and rightly, the prioritization of original content. I will be ramping up that in the New Year in response. As the huge bulge of baby boomers reach the last round-up, more and more money, time, and energy will be spent on geriatric and end-of-life issues. Obit Patrol can help facilitate that conversation, and will.

And I will join in the year-end fun, if only to point up the contrast between my emphases and those of the mainstream media. A look at reader responses shows me what my “top 10” deaths were for the year. Who were they? Do you recognize any of the names? Let’s take a look:

6. Vic Damone — singer and actor, 89; the smooth-voiced crooner appeared in movie musicals such as Hit the Deck and Kismet

10. Hwang Byungki — musician, composer and scholar, 81; he was a master of the gayageum, a Korean zither-like instrument

And as I get older, it becomes more personal. My 40th high-school reunion took place this summer. I didn’t attend because, well, I hated high school. Nonetheless, a roster of my dead classmates was produced and forwarded to me. The number of my dead contemporaries stands at an incomprehensible FORTY, or one for each year since we graduated. (I can’t explain why the numbers are so high save for the fact what we all grew up downwind and downstream of the Rocky Flats nuclear weapons plant on the Front Range of Colorado. Hmmm.)

And I myself went through a health scare that extended from mid-2017 to early this year — neurological damage that had me bedridden for months and thrust the prospect of my own imminent death into my face. You can read my thoughts on that here.

As 2019, look for more original content, better curation — anything I can do to make the site a more rewarding and informative experience. As always, I welcome your input! Thanks to all my faithful readers, and the unsung heroes of the obit desk who bring these lives to light.