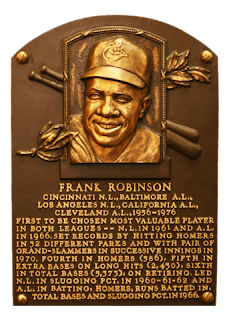 Hall of Fame outfielder; first black manager in Major League Baseball. The only player to win the MVP Award in both leagues, he was also World Series MVP in 1961. A great hitter and an aggressive runner. Amazing stats, topped by his fourth-place position in career home runs batted. Via ESPN.