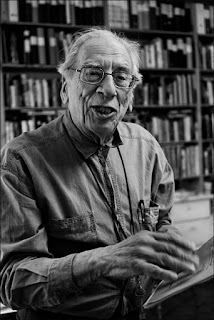 Patriarch of the New York City folk scene; opened the legendary Folkfore Center in 1957; produced Dylan's first concert in NYC in 1961; led and won the fight to make music in Washington Square Park. He was a columnist for "Sing Out!", the great folk and protest journal; he even broadcast a folk-music show on WBAI. He evangelized for folk music and turned on an entire generation. Joni Mitchell was discovered at his Center; Peter and Mary of Peter, Paul, and Mary met there.  AKA Israel Goodman Young. Via the New York Times.