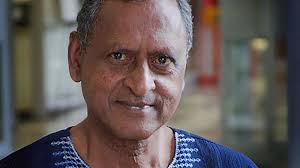 Civil rights activist and political prisoner; keeper of the "Robben Island Bible." At the infamous Robben Island prison in South Africa, it was "Sonny" Venkatratham who, allowed to bring one book, brought the complete works of Shakespeare. Later in some dispute it was taken from him; he got it back by referring to it as his "Bible"; the unthinking guard did so. They doctored up the outside to make it look more Bible-ish, and passed it secretly among a group of 34 prisoners for years.  Via iol.co.za.