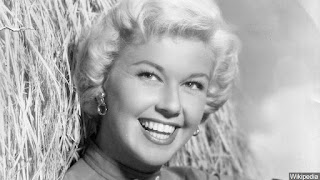 Singer and actress; animal welfare activist; beloved icon of squeaky-clean '50s film. She will be best remembered for, first, musicals, then romantic-comedy vehicles of the 1950s and 1960s, which she shared with male stars such as Rock Hudson, Cary Grant, and James Garner (Pillow Talk, That Touch of Mink, The Thrill of It All). Though stereotyped as a cheery virgin on screen, she was a marvelous serious actress, as demonstrated in films such as Love Me of Leave Me and Young Man with a Horn. And she could sing. Though she was put primarily in the service of saccharine ballads, she could also smolder. AKA Doris Mary Anne Kappelhoff. Via AP.