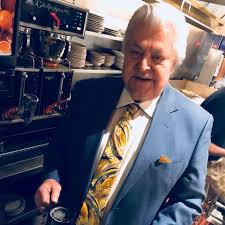 Restaurateur; owner of legendary Denver eateries Pete's Kitchen and Pete's Satire Lounge (aand Pete's Greek Town, and Pete's Gyros Place . . . ) Back in my comedy days, Pete's is where we would go after a show -- as it was one of the few 24-hour joints in town. Likewise, we hung at the Satire for hours, where we could cop an indifferent burrito and hang out in the red leather banquettes, gazing up at the black ceilings with glitter tossed in for good measure. The Smothers Brothers and Bob Dylan had played the Satire back in the early '60s . . . and I think Dylan got fired. Via the Denver Post.