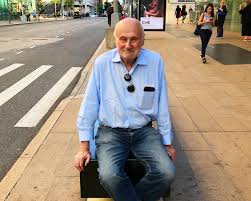 Film exhibitor, distributor, and producer who launched greats such as David Lynch, the Coen Brothers, and John Sayles. He lived a tumultuous life -- as a child, he hid from the Nazis with his family in the depths of a Ukranian forest. When he grew up, came to New York, and ran the Village East, which became the Fillmore East. Then he took over the Elgin, and created the midnight movie. He started with Jodorowski's El Topo, later John Waters' Pink Flamingos and Perry Henzell's The Harder They Come. These three films were the backbone of the revival-house movement of the 1960s and 1970s. Every middling town or larger had a repertory, alternative cinema in which programs changed almost daily, focusing on themes, erudite foreign fare, bizarro exploitation films . . . whatever might appeal to the marijuana-inflected brains of its patrons. It was gonzo cinema, all the time, and we have Barenholtz to thank for it. Here was a real influencer, who, instead of doing market research, put on what he wanted to see and struck a chord with the small but enthusiastic and faithful in dependent cinema lovers. (He also encouraged reappraisal of directors such as Keaton and Griffith.) Then he started distributing, films such as Night of the Living Dead Eraserhead, Meeetings with Remarkable Men, Derek Jarman, Return of the Secaucus 7, The Atomic Cafe.  He produced Raising Arizona, Barton Fink, Miller's Crossing, Requiem for a Dream. He contributed much. AKA Ber Barenholtz. Via IndieWire.