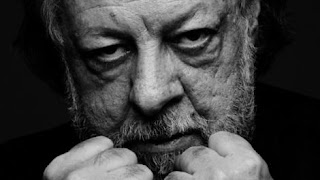 Magician extraordinaire; writer, actor, and scholar -- via the Hollywood Reporter. AKA Richard James Potash. An amazing talent, an encyclopedic mind, and a killer wit. Put them all together, you got Ricky Jay.

He made his name as a mater of close-up and sleight of hand magic, the most difficult to pull off. He was an expert card-thrower, once launching a playing card 190 feet at the speed of 90 miles per hour. He had a great stage persona, and his patter was intelligent and compelling -- a "born" entertainer (although we all know how it takes an obsessive, consuming effort to make it look that easy. He broke through into other mediums, and soon was employing his knowledge and skills for directors such as David Mamet and Paul Thomas Anderson.

Being somewhat of an obsessive myself, enamored of circuses,sideshows, magic, carnivals, and the like, I always sweep through the 790s in the public library. In 1986, I found a book titled Learned Pigs and Fireproof Women, a wonderful survey of bizarre performers. It is still one of the best books on that subject. Jay continued with a string of books on magic, cards, gambling, cons long and short, and much more on the seedy and mysterious underside of life and entertainment.

He sparked new interest in magic in America. He educated and entertained. He was fascinating -- and how many people can you say that about? Rest in peace, sir -- you were magnificent.