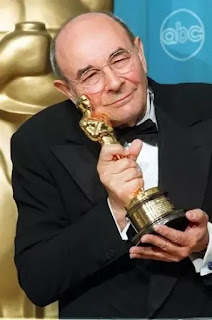 When you start your directing career with On the Town (1949), it’s already difficult to outdo yourself. He did. The director and choreographer, whose influence on film cannot be underestimated, died on February 21 at the age of 94. Via Richard Severo at the New York Times.

Stanley Donen possessed three great, intersecting gifts — he was a brilliant choreographer, he had a game-changing and personal vision as a director, and he was capable of exploring emotion and relation on film like few others.

He started off as a chorus boy, a hoofer, 16 years old in 1940, performing in Pal Joey on Broadway. Here he formed his long and tumultuous relationship with Gene Kelly. In 1943 Donen moved to Hollywood to choreograph for MGM. There he hooked up with Kelly again, creating technically ambitious, beautiful, and emotionally resonant set pieces in films such as Cover Girl (1944), Anchors Aweigh (1945), and Take Me Out to the Ball Game (1949).

Then came On the Town, which ripped up the old template of the movie musical and put in on the streets, inspiring not only movie musicals French and British New Wave filmmakers as well. After that, Donen worked with Fred Astaire on Royal Wedding, which featured that famous “dancing on the ceiling” sequence.

He directed the now-guilty-pleasure Seven Brides for Seven Brothers (1954).

He directed It’s Always Fair Weather (1955), my favorite film musical. An informal sequel to On the Town, it follows a reunion between three war buddies that makes all of them question their life choices. It’s surprisingly mature and complex take on identity and friendship make it a great film — and on top of that, it’s a great musical.

More musicals for Donen — Funny Face and The Pajama Game (both 1957), and Damn Yankees (1958). Then Donen moves into other genres, creating more classics such as Charade (1963), Two for the Road, still I think the best movie ever about marriage, and Bedazzled (both 1967), and the wonderful send-up of the double feature, Movie Movie (1978). Few people have made me laugh so hard, or enraptured me with song and dance.